I created this list of activities after reading the wonderful book by Scott Thornbury called 30 Language Teaching Methods. I realized that I these old methods could enrich my current teaching, so I made a list of activities which I will try.
ADVERT:

Reading Aloud
Reading Aloud was one of the things I did not use in my classes when I was younger. But at least three of the influential methods in the past claimed that reading aloud is an essential part of learning a foreign language. That is why I started using it and I must say that it works. Students’ pronunciation is better and they understand the texts better.

1. Listen and repeat.
Students first listen to the native speaker reading each sentence and then they have to read the sentence themselves. They try to get as close to the original as possible. You can see an example of such a text in the video below (from 0:00 to 1:35). You can see how to create such a recording here.

2. Shadow reading.
This activity demands no preparation. Just play the recording and ask the students to read along with it (Yes, they read aloud at the same time as the recording plays). It might seem like a total nonsense but in my experience, this helped my students incredibly. Moreover, there is no preparation and it takes very little classroom time.


Translation
Yes, translation! It is not a dirty word. Believe me 🙂 Translation has been used for centuries and no second language learner can be without it (even though some pretend they can). Moreover, the ability to translate is the one the learners will probably really need in their real life. They will certainly be asked “How do you say this in English?” or “What does this mean?” In fact, a few weeks ago, my family and I went to Poland on holiday and I had to translate the menu in a restaurant for them. Even though, I was pretty clear of what was on the menu, my family were less than happy with my translation effort.
To practice translating, I suggest the following three activities:

1. Retranslate.
Ask your students to translate a few sentences into their mother tongue (phrases are perfect for this). Check their translations and then ask them to translate the sentences back into English. They should try to get as close to the original as possible.

2. First letters
Write several sentences in students mother tongue and provide the first letters of the words of the ideal English translation. For example:
Ona se dívá na televizi každý den. SWTED /She watches television every day./
Students work on their own and they try to translate the sentences using the first letters.

3. Table translation
I usually take a few sentences from a text we have read in the class and I turn them into a table like the one below. I try to keep phrases in one field to suggest that they cannot be translated word for word. Then I ask the students to translate the text into their mother tongue. The filled table then clearly shows which words the students have problems with and how many words they understand. (A note from extensive reading research: if more than three fields are incorrectly translated, then the students do not understand the text very well!!!) 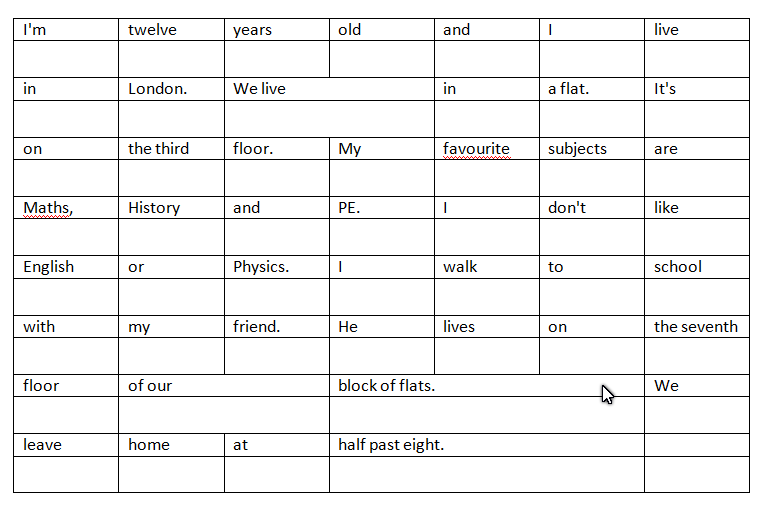 An example of a translation table.

Memorization
1. My story
A few years ago the textbooks Inside Out came with a new activity called Anecdote. Students were given a set of questions on a given topic and suggested answers. Students chose the answers that suited their situations or they created some themselves. Then they took their answers and created a story which they told their partners. (You can see an example of such an Anecdote here.) I took the activity a step further. I ask my students to memorize their anecdote and then I want to hear it. It works and it gives the students some language chunks which they might use later.

2. Memorize a film dialogue
This one is simple and nice. Find a film your students like. Find a dialogue that contains a lot of useful phrases that native speakers would use (they don’t have to be grammatically correct), transcribe it and ask your students to memorize it.


Conclusion
Dictation, translation and memorization – it sounds like who is who in ESL criminals.
But I still think that these guys do not deserve to be condemned. They got on the bad list because they were overused and misused in the past. If used reasonably, they could greatly help you in teaching English.